“I am here to stand up for every group that’s been targeted.” Meet Zainab, a 16 year-old Yemeni American woman who led our “Youth United Against the Muslim Ban” march to Brooklyn Borough Hall!

On Friday, March 10th, our youth and teens took to the streets of Brooklyn to protest President Trump’s bigoted executive orders and stand united against hate. Students from our Youth Program gathered with friends and neighbors of all faiths in the bitter cold outside our Downtown Brooklyn office, and collectively marched down Court Street for a rally on the steps of Brooklyn Borough Hall.

Here is an interview with Zainab, a 16 year-old Yemeni American teen woman in our Girls Club who led the group with cheers and slogans all the way down Court Street, and spoke passionately against racism at Borough Hall.

A special thank you to our “Brooklyn Youth United Against the Ban” partners: Kids for a Better Future, Sadhana: Coalition of Progressive Hindus, Bangladeshi American Community Development & Youth Service (BACDYS) and Women for Afghan Women.

Zainab leads a chant during the “Brooklyn Youth Untied Against the Muslim Ban” rally at Brooklyn Borough Hall on Friday, March 10th.

AAFSC: You opened the youth march with an incredible speech. Can you tell us about how you prepared, and how it felt to lead the march?

Zainab: I have my speech memorized, and I can say it again. I just wrote about what I see happening, and how I feel:

Hello everybody, my name is Zainab, and I am 16 and I also happen to be a Muslim, Yemeni, American woman. Trump’s Muslim ban is wrong and unconstitutional. It broke and will continue break many families apart. It is my civic duty to stand up to hateful policies that are being enforced. America was founded on religious freedom and to have the Muslim ban is a threat to our democracy. Since Donald Trump’s been president bigots and racists have become bold. I am here to stand up for every group that’s been targeted by Donald Trump whether it’s Muslims, Mexicans, African Americans, or scientists, because together we will resist because together we are stronger.

To be honest, I always get scared of talking in public. I am always shy, talking in front of my classmates at school. Everywhere, I am shy. I’ve never done anything like that [leading the march] before, and you know, I said, “Let me just try, let me just face one of my fears.” I was shaking at first, and then I said “You know what, forget it,” and then after that, when everyone was cheering with me, I could have just kept on going all the way to tomorrow.

How did you decide what to say when you were leading the group march down Court Street? Had you been to other marches before?

I wanted everyone to say, “Say it loud, say it clear, immigrants are welcome here!” because that’s what the march was about. I used the words “No hate!” because that’s definitely what’s going on. After the first executive order, I went to a rally in Battery Park, and I was screaming “Whose streets?!” and everyone responded “Our Streets!” I was in the middle, and no one could see me. In that case I was not that shy because there were a lot of people and they couldn’t even tell where the voice was coming from.

How often do you watch the news? Why is it important to stay aware and engage with politics?

I mostly watch the news every day, and I watch it with my big brother and big sister. We watch all of them; CNN, Fox News, MSNBC, Rachel Maddow. To be honest, a lot of my classmates, they aren’t really that aware because maybe the news doesn’t really affect them, but I know that it really affects me because I am Muslim and I wear the hijab and when people look at me they say, “Yeah, she is a Muslim.” It’s important to know how the news is talking about you and how they see you.

How did it feel to speak on the steps of Brooklyn Borough Hall?

I had so much to say–if you see me in the video, I’m looking for my words. I know them, but it’s hard for me to pronounce them. But I just felt like, “Ok, it’s ok if I stutter.” I just wanted to speak my mind.

How did it feel to see people, including non-Muslim people, giving us the thumbs up when we marched?

I was giving the thumbs up back! I knew when they were putting the thumbs up that they wanted to join us and that they supported us. It felt good. It makes me feel good that there’s still human in them. I felt really hyped up, and I was screaming even without a microphone.

When did you first come to America? How has AAFSC and the Girls Club influenced you since you arrived?

I came a year and four months ago. I didn’t speak that much English when I arrived, I didn’t know how to read. The Center helps me with my homework. I used to cry every day, I used to be really upset, because I would see everybody doing their work, and I couldn’t do it. You know, when you want to do work but you don’t even know what to start with– you don’t have a clue about it because you don’t even know how to talk and you’re expected to read and stuff, and that was really difficult. They help me with my homework here.

Girls Club helps me because I make conversations with people to figure out new words, the words that I’ve been hearing and try to pronounce it myself. We talk about Trump, make-up, modesty, the Daily Show, and Tomi Lahren, and other stuff.

I used to travel scared; I never went on the subway by myself, I would go to the store with my sister even, even though my dad would let me go alone and everything, but I had this feeling inside of me that I was, you know, not confident enough. I’m confident in myself now. I was used to just walking with someone, always with me. But now, coming here by myself, I’m more confident. Now I’m like, “Yo! I’m here!”

Do you feel like these kinds of protests help change the future for the better? What kind of change do you want to make in the world?

I do feel hopeful. The other racist president, he lost [in the Netherlands]. I think that’s good. People see what’s happening in America and they say “No, not in this country.”

I try to smile to people. When I’m having a bad day, and I walk around in the street and see people smiling, it kind of lightens my mood so I try to do that for other people. I’m learning more about discrimination and social justice at the internship at Project Reach. But I’m also just focusing on how to read, getting good grades, and trying to go to good colleges. 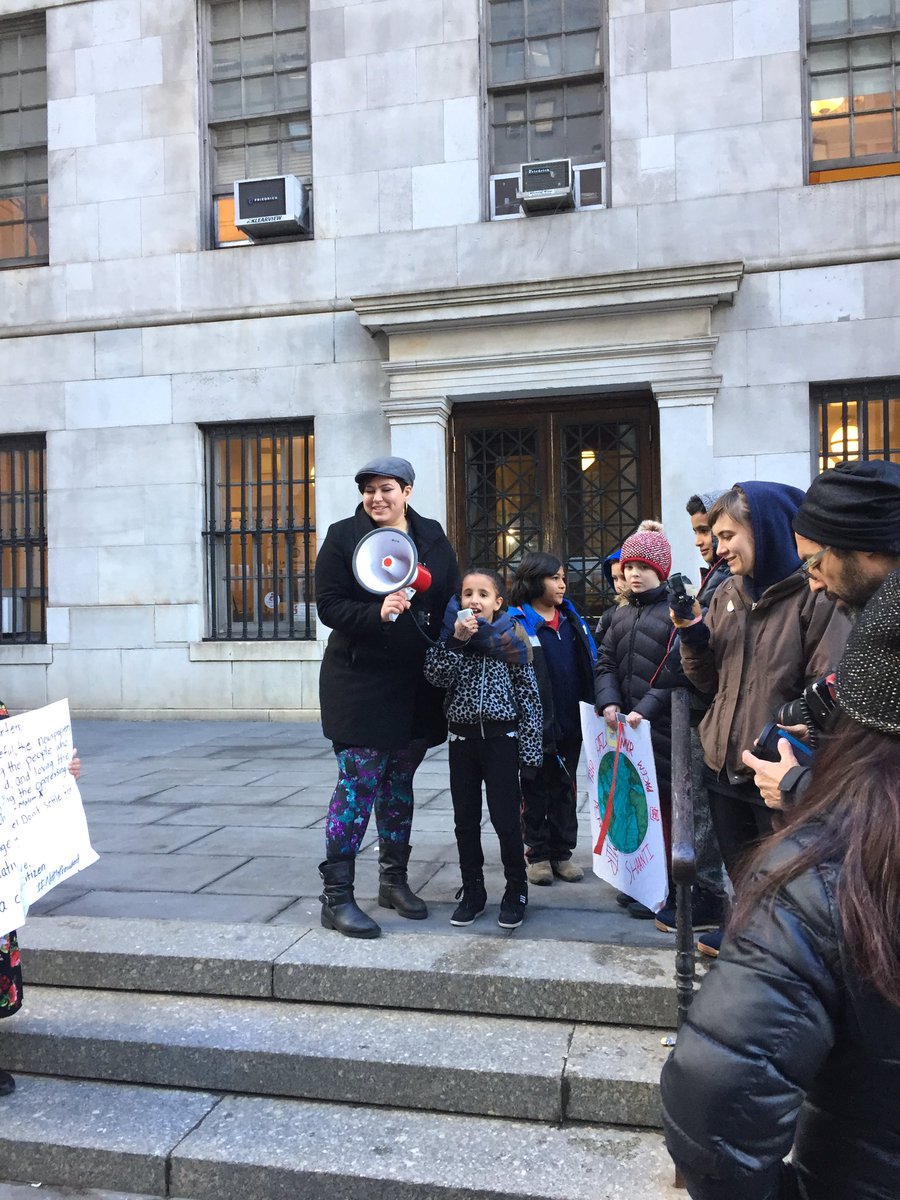 “This land was made for you and me. Human beings are free to go anywhere they want. Muslims are welcome here! We love everybody!”- Athowe, 9. 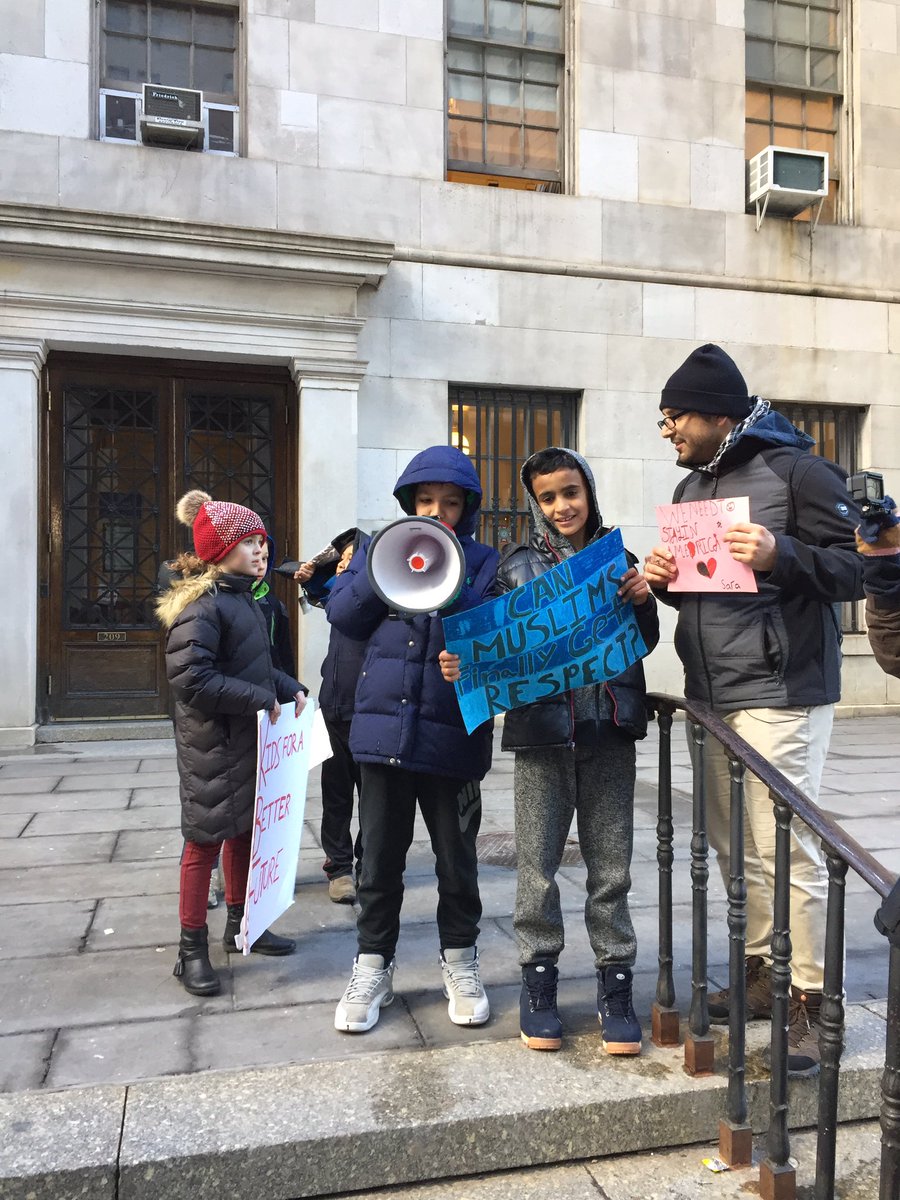 “This land is peaceful, we are all equal.” Our Youth Program students performed an original slam poem at the rally at Brooklyn Borough Hall.

Check out the video from the march above!