For nearly 25 years, AAFSC’s Youth Program has provided tutoring, enrichment activities, and a space for young people to engage with their communities. One of our most important features is that most of our staff members come from the communities we serve, and many speak the native languages of our students – making our Youth Program among others comfortable, culturally and linguistically competent spaces. An important part of our Youth Program is Girls’ Club – an safe space for young women to gather, develop leadership skills, discuss issues, and make friends within the community.

A few weeks ago, we added a new component to Girls’ Club: the Young Women’s Leadership Initiative. Every Saturday, female mentors come to AAFSC to talk with our teen girls – providing them with tutoring, friendship, and, most importantly, advice and mentorship. All of our mentors are young women who are part of Arab, Middle Eastern, Muslim, South Asian, and immigrant and refugee communities – which allows the girls to build connections with mentors who have gone through similar experiences.

Sarah al-Saidi, a former Case Planner in our Brooklyn office who now studies mental health and stigma in the Arab-American and Muslim communities, stopped in to talk to the girls last Saturday. A Yemeni-American young woman who grew up in Brooklyn, Sarah graduated from Sarah Lawrence College and is now pursuing her Ph.D. at Columbia University. We spoke to Sarah about her experiences growing up Yemeni-American in Brooklyn, breaking barriers in pursuing her education and her career, and the importance of female AMEMSA mentorship. 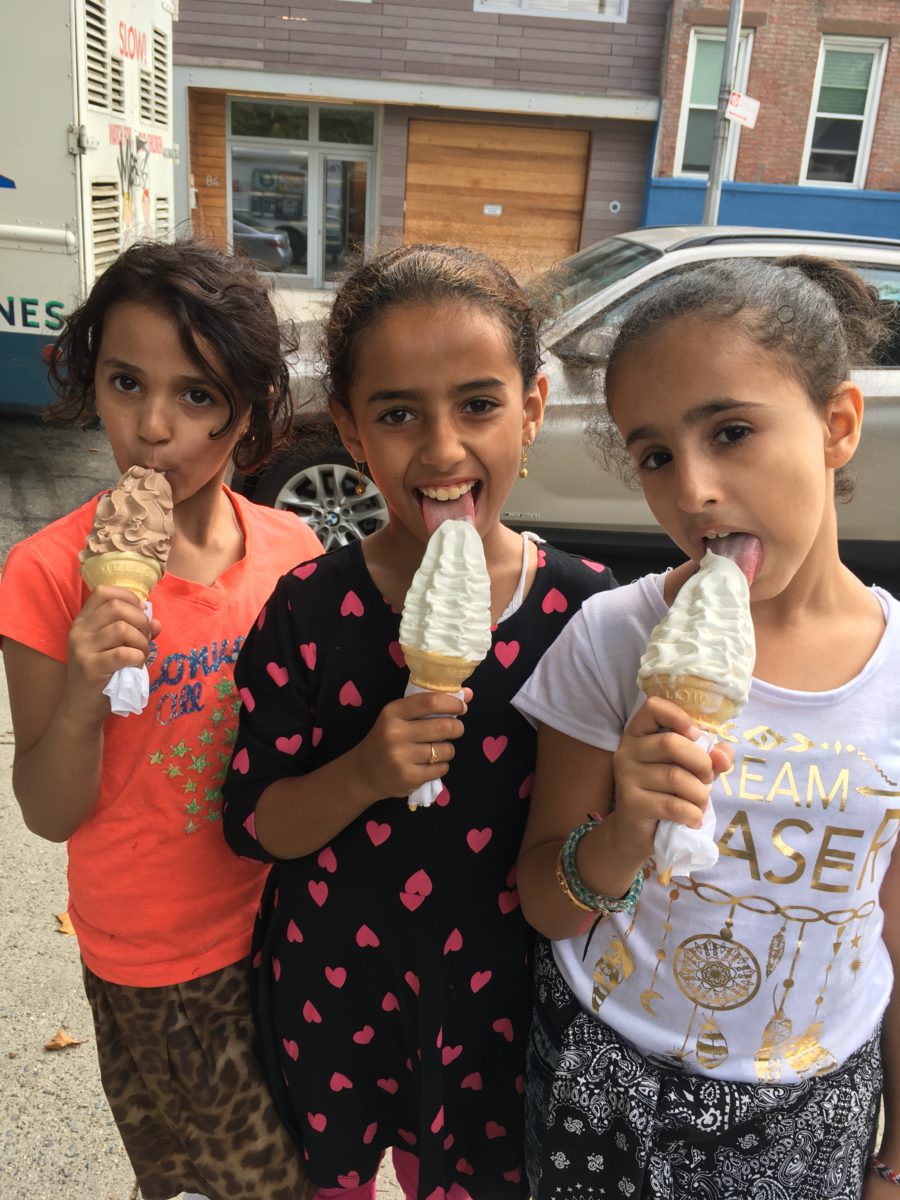 “It’s often a lot of Yemeni immigrants who came in to the U.S. back in the sixties, seventies, maybe even earlier – the first migrants were men who came to work, to provide financial support to their families,” she said. “And it wasn’t until later they started bringing their wives and their children. There was this very big fear of like, ‘We’re bringing our families to this new foreign culture. Will they forget their Yemeni culture? Will they lose who they are? Will they lose their religion?’ So as a result of that I think a lot of Yemeni families prevented their daughters from pursuing education. They didn’t see it as important, in their mind it was ‘My daughter’s gonna get married and gave kids, and she’s gonna fulfill her role. She’s gonna fulfill her role as a woman, and that’s a great thing.’ Which, I don’t necessarily think that’s a bad thing, but I think the issue is the choice. A lot of women had it pushed on them, and they weren’t necessarily asked.”

The YWLI focuses on providing young women to support in navigating various expectations from their communities. Sarah discussed the internalization of those expectations:  “If a girl is growing up in a family where she’s being told ‘Your only job is to be a mother and a wife, and we don’t want you going to school, that’s not necessary for you,’ she’s gonna internalize that.  Part of that is that she’s going to internalize low self esteem… ‘Could I pursue higher education?’ If she had dreamed of being a teacher she would first need to feel like she has the ability to be a teacher, or to be a doctor, that’s where the self-efficacy piece comes in. Not being empowered, not encouraged, obviously they’re gonna internalize a lot of that stuff and feel a lot like ‘I can’t do it, I’m not capable, I’m not smart enough, only boys can graduate from college or go to college.’”

Sarah discussed the effects of AMEMSA mentors on the self-esteem and self-efficacy of young girls: “You can look to media and TV and say ‘There’s women doing amazing things’. I think that’s very inspiring, but I feel like often girls are looking at that and thinking ‘Well, those women are not Yemeni’ or ‘Those women are not Muslim, they don’t have my life, they don’t look like me. No one that looks like me is doing that stuff.”

One of Sarah’s first mentors was her mother: “When my mom was growing up in the U.S., she was the eldest daughter, and so she  experienced a lot of the pushback. She was in school, and all the men in the neighborhood were saying ‘Oh, she shouldn’t be in school, she’s a woman, she’s gonna lose her culture, she’s gonna lose her identity. And so she was actually pulled out of school early on…. And because of that I think that’s why my path, the opportunities I’ve had were so different, because my mom had fought so many battles on my behalf. By the time I was growing up – we used to share a bedroom together; and we would have conversations at night and she would say ‘Pursue your education, follow your dreams, figure out what you want, and then think about marriage or family. But first fulfill your own aspirations.’ So I always have that ingrained in my mind.'”

“If you are growing up in a culture where you’re not Arab enough in your own culture but you’re not American enough how do you navigate that bicultural identity, and define your sense of self? A lot of Muslim and Arab Americans will go for counseling because they feel confused. There’s one message they get from home and one message they get from the world and neither seems to fit. The other piece is just feeling isolated whether its from the media or the current political climate feeling like you don’t belong in a country, in a home that you’ve only known…having someone who looks like you saying ‘I’ve been through this, I did this, this is how I navigated this problem, this is how I chose this path’…being able to mentor young girls who look like them, think like them, act like them, that’s very helpful.”

Sarah said that through mentoring and leadership development opportunities, young women can drive change they want to see in their communities: “We’ve seen it happen in this community…this is funny, but I was one of the first girls to start driving in my little neighborhood in Greenpoint. At that time it was like ‘This woman is driving! This Yemeni girl is driving!’, and now everyone drives.” Driving was a small step for Sarah, and for her community. She hopes that those steps start paving the way for other young girls.

“That’s a small example but I think even ‘Sarah went to college and she turned out okay…I want my daughter to go to college, I want her to do amazing things, I want to be proud of her in the way we’re proud of these other women.’ It definitely works…I think that’s the way things have changed over time, slowly but surely. These families can look at other families and say they’ve done this, they can even get advice from those families, talk to them about their concerns and their worries…one person breaks down the door and that door is cracked open for the next person.”