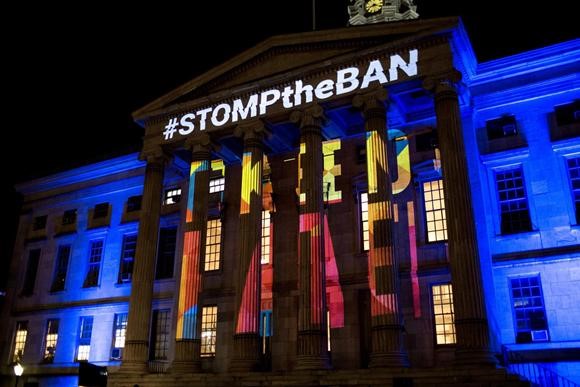 FOR IMMEDIATE RELEASE: June 26, 2018
Contact: Hannah McIntire, hannah@aafscny.org, 718-643-8000 ext. 23
The Arab-American Family Support Center Stands in Solidarity with Those Affected by the SCOTUS’ Travel Ban Ruling
New York, June 26, 2018: It is with the utmost concern that we share the disheartening news that the Supreme Court has ruled in favor of upholding the Travel Ban, also known as the Muslim Travel Ban. This decision will deny entry to many people from the following eight countries: Iran, Yemen, Syria, Sudan, Venezuela, North Korea, Somalia, and Libya. Over 350 million individuals will be affected by this decision, many of whom identify as Muslim.  It also continues to create a climate of mistrust and hostility towards segments of our population who are otherwise proud and hard-working Americans.
The Travel Ban proves to be a gross violation of American values and stands in opposition to the principles that the Arab-American Family Support Center stands for. The ban’s exclusionary and discriminatory posture towards large populations, sends a signal of support to those that practice xenophobia, Islamophobia, and bigotry.  It also sends a signal to many Americans that are part of the communities it targets.  It creates a climate that exacerbates feelings of depression, anxiety, and toxic stress within the respective Arab, Middle Eastern, Muslim, and South Asian (AMEMSA) communities that we serve. A report published and released last week in a press conference at our office by the New York City Commission on Human Rights found that 71% of Muslim, Arab, South Asian and Sikh New Yorkers do not report discrimination, and this finding was confirmed following the Travel Ban.
These are difficult times for people and communities that are already an important part of the fabric of our diverse society.  At the Arab-American Family Support Center, we are committed to standing in partnership with our community members to address rising levels of depression and anxiety, and combat the stigma around mental health through initiatives such as our Community Partners in Care (CPIC) initiative, which seeks to refer people of all faiths and backgrounds to culturally-responsive and linguistically-competent mental health professionals. We will have our kickoff meeting for mental health services this week, where we will discuss the mental health crisis exacerbated by xenophobia, Islamophobia, and bigotry in the United States.  We will be launching our collaborative care model.
AAFSC firmly believes in standing up against Islamophobia and any form of xenophobia, racism, and bigotry. It is in these challenging times that we need to come together more than ever–in compassion and solidarity. Last year, AAFSC joined other activists at JFK airport to advocate for individuals affected by the first iteration of the Muslim Travel Ban. In October, our youth and community members came together to Stomp Out the Ban through an art and dance protest at Brooklyn Borough Hall. With the Supreme Court’s decision today, we will continue to uphold the principles of inclusivity and human rights. AAFSC remains deeply committed to cultivating safe spaces for our community members, allies, and families. We call on all policymakers in every level of government to pass laws that bring families together–not divide them. We call on policymakers and philanthropic organizations to fund programs and organizations that are helping to heal the hurt. Let your funding and contributions speak volume about who we are as a nation–welcoming, compassionate, generous Americans.