The Intersection of Pride Month and World Refugee Day

Throughout Pride Month and on World Refugee Day, the Arab-American Family Support Center is taking time to acknowledge the intersection between the fight for full human rights across LGBTQIA+, immigrant, and refugee spaces.

As we know, the battle for equity and equality is ongoing and each marginalized community faces the struggle in unique ways. While our doors are open to everyone at the Arab-American Family Support Center, we specialize in supporting Arab, Middle Eastern, Muslim, and South Asian (AMEMSA) communities due to our cultural and linguistic competency. With the rise in Islamophobic, xenophobic, and racist rhetoric in the United States, AMEMSA populations are particularly targeted.  With rampant levels of homophobic and transphobic attitudes, immigrant and refugee communities who also identify themselves as LGBTQIA+ are subject to additional risks.

According to UCLA’s Williams Institute, there are about 1 million adult immigrants in the United States that identify as LGBTQIA+,[1] with 267,000 being unauthorized, and 637,000 being documented.[2] LGBTQIA+ immigrants and refugees residing in the United States are facing unprecedented challenges that impact their overall safety. More specifically, in American enforcement and detention centers, one of four reported incidents of sexual abuse involved a transgender person over a period of four years. LGBTQIA+ immigrants seeking security because of their identity and sexual orientation are discriminated against, leading to refusal of protection and longer detention sentences.[3] We know that the numbers are underreported because the U.S. government fails to report sexual orientation and gender identity in federal immigration programs and the U.S. census.[4] We do understand, though, that there is a significant LGBTQIA+ immigrant and refugee community in the United States who are struggling to obtain access, equity, and fair treatment.

AAFSC is committed to ensuring the safety and wellbeing of all immigrants and refugees regardless of their identity. We strive for a world free of discrimination where all people have equal rights in law and in practice.  This begins with honoring the intersectionality of marginalized individuals and working together to tackle human rights violations, acts of hate, and discrimination while building and sustaining inclusive communities.

This June, join us in recognizing the diverse identities that make up LGBTQIA+ communities, including immigrants and refugees, in order to celebrate and support the liberation of all marginalized communities fully and honestly. 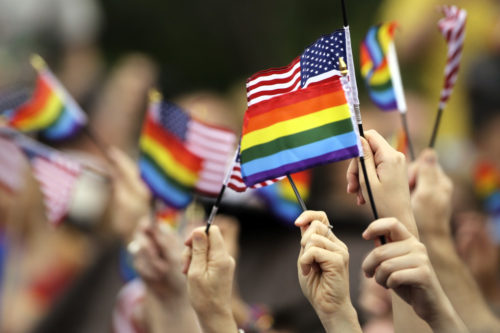