What is the U.S. Census?

How often does the U.S. Census happen?

Yes! Every household must complete just one Census that accounts for all household inhabitants, including all infants, children, adults, immigrants, and refugees – it’s law!

Why is completing the 2020 Census important?

The data collected by the census captures the needs of a community​. This means that the census determines funding for new schools, hospitals, roads, libraries, housing, and more. Further, it also redistributes seats in the U.S. House of Representatives across the 50 states. For a state to get its fair share of seats based on its population, an accurate population number must be available from the census data.

Here is the timeline of communication for the 2020 Census:

If you haven’t responded yet:​

Early April – Reminder postcard​s sent to each household that hasn’t completed the Census.
April 8-16 – Another reminder is sent along with a 2020 Census paper questionnaire​.
April 20-27– Final reminder postcard​s are mailed out.
May– Census Enumerators are sent to households to collect census data.

No! National Census Day is April 1, 2020. This means that the data you fill out on the census should be reflective of what your household looks like on April 1, 2020. You should aim to have your census complete on or before April 1, 2020, but data will continue to be collected throughout April and May.

What is a Census Enumerator?

An Enumerator is a Census Bureau worker that is trained to collect data in-person​. They will carry government I.D. and have a Census branded laptop and bag​. Beginning in May, enumerators will go door-to-door to collect data from households that have not self-responded to the census yet. We encourage everyone to self-respond and our staff will be actively assisting individuals in the coming weeks.

There are four options to fill out the 2020 Census:​ online, by paper, by phone, and with a Census Enumerator. Most households will receive a code in the first invitation email that will allow you to fill out the census online. If you choose not to fill it out online, a paper questionnaire will be mailed out. For neighborhoods that are determined to have low digital access, paper questionnaires will be mailed out first.

Will the 2020 Census be available in other languages?

The paper questionnaire will be available in English and Spanish only.

Additionally, translated web pages and guides will be available in 59 languages – the full list is available here.

What kind of questions will the Census ask?

Each household completes only one census. For each person living in the household, the Census Taker must fill out their:

For the Census Taker, it will also ask:

The Census WILL NOT ASK:

Will my information be confidential?

Yes! By law, the Census Bureau must keep all Census data confidential​. You data is protected by Title 13 of the U.S. Code​ and it cannot be used against you in any way and cannot be shared with other agencies​. Violating this law comes with severe penalties, including fines and jail time.

What about people living in non-traditional households? Will they be counted?

Which groups are at-risk of being undercounted in the 2020 Census?

Groups who are hard to reach and risk being undercounted include: immigrants, refugees, undocumented people​, infants and children​, racial and ethnic minorities, low-income people​, highly mobile people, and people with disabilities.

Why are these groups considered hard-to-reach communities?

The main reasons why these groups do not fill out the census include language barriers​, lack of education about what the census is, fear of participating because of immigration status​, misconceptions about how the data will be used, and confusion about how to fill it out.

Is Brooklyn at-risk of being undercounted?

Yes – Brooklyn is the hardest to count county in all of New York State​. Over 80% of Brooklynites live in hard-to-count neighborhoods​ and in the 2010 Census, 33% of Brooklyn households did not mail back their census forms​. That resulted in Brooklyn having the lowest mail return rate in the country.

The map below shows which areas of the city were underrcounted in the 2010 Census, including Brooklyn. The dark red neighborhoods had a response rate of 50% or less. 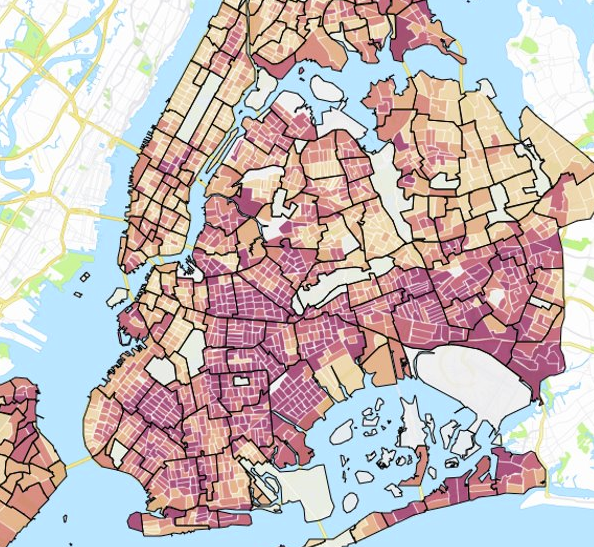 How is AAFSC ensuring a full count in the 2020 Census?

AAFSC is deeply committed to reaching hard-to-count communities to ensure a full count. We are collecting pledge cards from the community so that we are able to reconnect when the census arrives and remind people to fill out the census. We established an internal Census Team that is conducting outreach events and providing resources to keep our community educated and informed about the 2020 Census. Our programs are embedding census education and outreach into their frameworks, including adding census information into our Adult Education and Youth Initiatives curriculum, and providing resources in our home-based visits under our Preventive Program.

How can I ensure a full count?

The best way to ensure a full count is to complete the 2020 Census and encourage your family and friends to do the same!

How can I learn more?