AAFSC’s Brooklyn headquarters serve one of the largest Yemeni communities in the United States. On February 2nd, 2017, thousands of Yemeni bodega owners and their friends, families, and supporters protested the Muslim Ban at Borough Hall. On the same day, Susan Schneider, one of our volunteer English teachers, and her co-teacher Joan Grant went with some of their female Yemeni students to a press conference opposing the ban at Manhattan’s Town Hall.

On January 26th, 2018, six nonprofit and advocacy groups in New York City hosted Yemen Can’t Wait: Rally to End U.S. Complicity in War on Yemen. The groups gathered outside the Manhattan offices of Senators Chuck Schumer and Kirsten Gillibrand, encouraging them to stand up to their colleagues and end U.S. involvement. Susan heard about the protest and started pitching the idea to the women in her class, hoping to get some to join her.

Starting when the Muslim Ban was first enacted in January 2017, Susan started bringing up political topics to her students – marches, protests. She hung the now-famous poster of a young woman wearing an American flag hijab on the wall of our tiny kitchen, her makeshift classroom, after the Women’s March in 2017. After they attended the press conference last year, she added empowering words – “strong” and “brave” to their vocabulary.

Susan told her class she would come to our Brooklyn office on the morning of the rally to meet anyone who wanted to come, but didn’t have high hopes. But when she entered the office, three women were there, dressed in warm clothes, ready to go.

Thank you, @katecma of @PeaceActionNY for leading us in our #YemenCantWait chant yesterday. And we like your gloves, Carmen 🙂 pic.twitter.com/R0rPG8GPG8

The U.S. has been funding Saudi efforts in Yemen since 2015 and has carried out independent raids. At least 10,000 civilians have died in the last two years. 90% of goods in Yemen are imported, and when Saudi Arabia imposed a blockade in late 2017, the already food-unstable country was plunged into famine. The country is plagued by cholera, and the majority of the population need humanitarian aid just to access drinking water and enough food.

Susan says the women are suffering the effects of the war, as many have family who are still there. “There’s no water, no food…they’re seeing their country be destroyed. The U.S. funds Saudi bombs – they’re forced out of their homes by the U.S., and then the U.S. puts a ban on them.” 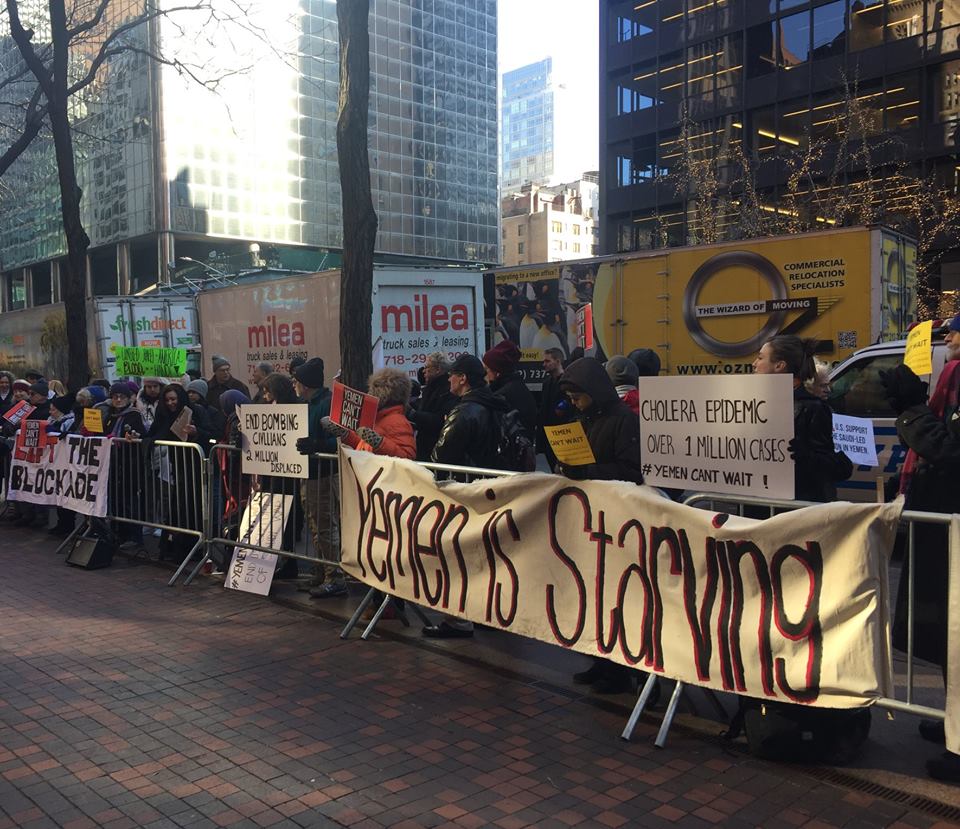 Speakers included Debbie Almontaser, founder of Khalil Gibran International Academy – an Arabic-focused school in Brooklyn, with which AAFSC is a lead partner.

Attending the protest was well outside the women’s comfort zones – all three walked through Grand Central Station for the first time on their way to the rally, and one commented that she was not used to taking the subway – “We have buses in Sana’a, but no subways!”

“They probably would not have been there without AAFSC. This place is very empowering – we respect their culture but also encourage them to leave their comfort zone.”